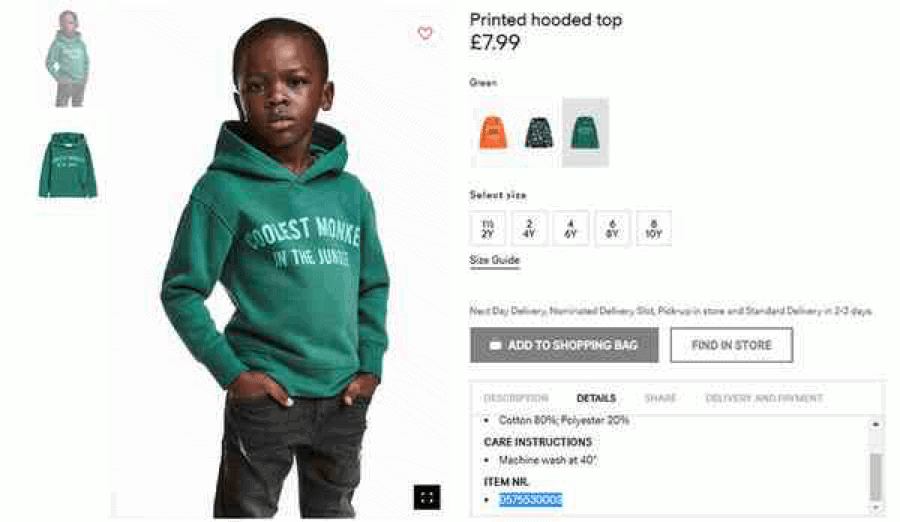 Earlier in January, H&M released an ad featuring a dark-colored child wearing a green hoodie with the inscription “coolest monkey in the jungle”. Soon after, the brand was accused of racism. The anger reverberated in social media – namely because Canadian singer-songwriter and brand collaborator The Weeknd loudly tweeted his disgust. Viral pandemonium ensued, throwing H&M in marketing-fail turmoil.

What was H&M’s marketing team thinking? How could they ignore such evidence? If you’re North-American, you may find that associating the term monkey to a black person highly offensive, given the history of slavery still too fresh in the collective memory. But let’s view the thought process through the cultural intelligence lense.

Did the Swedes miss the mark?

My first reaction was: Where’s the marketing team located? H&M is a Swedish brand. I am thinking the bulk of the marketing work unfolds at or near their headquarters in Stockholm. The Swedes may ignore the sadly historical connection between primates and Africans. The creative director, stylists, graphic designers, webmasters, and other members of the creative team may have known little or nothing about this cultural aspect. It is possible all they saw was a cute boy looking lovely in a green hoodie bearing what may otherwise be perceived as a term of endearment.

H&M unfortunately – or fortunately for their competitors – paid a steep price for their cultural “deficiency”. So what is the cost of such a marketing fail for the advertiser?

The cost of culturally-challenged advertising

In most cases, marketing budgets lead campaign development and distribution decisions. Often, multinational brands centralize their marketing resources at headquarters typically located in their home country. This is not necessarily an unwise business decision, as it may seem cost-efficient. However, it is risky if the marketing team remains cloistered in its “cultural ivory tower”. If there’s a lack of cultural awareness – or cultural intelligence – the margin of error for such mistakes is considerable. And the cost may well blow the carefully allocated budget to smithereens.

To calculate the cost of such a campaign failure, a brand can quantify in concrete and often high numbers:

But the highest price to pay for a culturally-challenged blunder is the devastating effect it may have on the brand’s image and reputation. That intangible is extremely difficult to measure and in fact, can be priceless: in fact, it can kill a brand altogether.

When Gerber marketed its baby foods in Africa, it kept its famously cute toddler on the label. The cuteness turned ugly when the brand realized, once on the market, that “in some illiterate parts of Africa, the packaging has to include a picture of what is inside the packaging”. Of course, no one wanted to eat a baby! The brand may have also reconsidered its name to market its products in France. In French, “gerber” means “to vomit”… Not exactly appropriate!

In 1997, Nike released the “Air Bakin”, a basketball sneaker that featured a generic, flame-like design. To some members of the Islamic faith, the flame resembled the word “Allah” in Arabic script. A culturally intelligent marketer, or an Arab-speaking colleague, could have spotted the resemblance, saving the shoe giant significant marketing dollars.

Centralizing marketing efforts while failing to educate teams about the cultural differences of targeted consumers is a risky way to manage multinational marketing budgets. And as the global market is no longer limited to large corporations – think online marketing – cultural intelligence will undoubtedly become critical to the success of any global ventures.