Too often, we think of cancer as a death sentence. However, this disease has multiple forms, and survival rates are increasing. In Canada, 1 person out of 2 will be affected by cancer during their lifetime, representing a significant portion of the workforce, whether employees or entrepreneurs who create jobs. While cancer does not discriminate – neither by race, age nor gender – the fact remains: in the workplace, it remains a taboo subject. There is a lack of knowledge about approaching and managing people with cancer and other chronic diseases. As a result, prejudice against them is still present. Companies need to open up and accept this reality, which is present in almost every household! 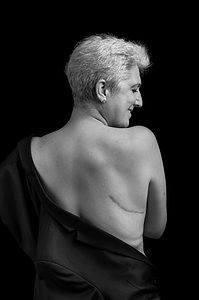 In April 2019, I was diagnosed with colon cancer. After a successful surgery and 8 rounds of preventive chemotherapy, I was declared cancer-free… for 2 days. Unfortunately, the routine scan used to check my post-treatment status revealed another tumour in the lung. Lucky for me (!), it was of a different strain and its early detection offered, with treatment, a good prognosis. Thus followed another 3 rounds of chemo and more extensive surgery (the photo shows the lung surgery scar left on my back). Later, a CT scan showed that the tumour had been removed, but indicated new cancer activity in the surrounding area. As small as the tumour was, the medical team decided to double down and eradicate it once and for all.

Translation: 7 more rounds of chemo and 33 rounds of radiation. That pretty much sums up my summer of 2021.

The global pandemic strikes when I am cleared of colon cancer and told I have lung cancer. So, both my livelihood AND my life are threatened by microscopic enemies. But the disease is not what scares me the most. I have faith in science and the amazing multidisciplinary team at the CHUM. I will get rid of this disease. But what will happen if my clients, partners, or creditors find out I have cancer? Will my business survive? Will I be able to take out loans? Facing such uncertainties, I decided to keep my situation quiet at work and around me.

I continue to work tirelessly. I only stop under anesthesia. I work from my hospital bed and in the waiting rooms, during each chemo session and after each radiation treatment. All in all, I take only one week of post-surgery sick leave, but as far as my clients and loved ones know, it’s just a tech break. I am strong, I love my business—I will be a cancer warrior! I will not let illness undermine my efforts.

I bounce back quickly with limited support and in complete secrecy. I develop proposals, negotiate—and win—contracts, conduct training and conferences while continuing to grow ACCULTURA’s programs and team. Surrounded by talented people and exceptional partners (who don’t know anything about my situation), I am pulling my company out of the COVID doldrums to find success.

In fact, I realize that this fighting spirit is driving many others. I’ve seen it in my countless trips to the hospital. While some people are affected more than others, many continue to be very active.

Why keep the secret?

The cancer stigma is as enormous as the beast of a disease it is. In the workplace, the bias against cancer remains. For too many organizations, a person battling cancer is a risk. Many see them as unproductive resources requiring too much in the way of special arrangements (frequent sick leave, adjusted work schedules and conditions, etc.). Some simply feel that they will be unable to perform to their full potential. As a result, they often choose to avoid hiring an employee or service provider who has cancer.

The typical bias usually associated with people battling cancer—or any other disease, chronic illness, or physical or mental impairment—is that they are DIS-abled, lacking the capacity to perform and deliver results as well as the “abled.” It was this stigma that caused me to keep the secret.

The benefits of hiring cancer warriors

But on a beautiful summer morning, the paradox strikes me! I was working on a fascinating training topic: unconscious bias. My personal mission, and that of my business, is to promote diversity, equity, and inclusion for all people in organizations and in society. However, I suddenly realized that I was hiding an important aspect of my life because I feared the repercussions of such prejudices.

That’s when I decided to “come out of the closet” and fight not only against cancer but also for my values and mission.

I convened my team and called my loved ones to explain my journey over the past few months. I told them of the fears that pushed me to keep the secret and how I realized the contradiction of the situation.

The reaction was unanimous: everyone demonstrated their admiration for the resilience and strength I had shown—not the pity I had feared. I was extremely touched and moved by the response. I felt accepted and supported and immediately regretted not having spoken sooner.

This experience has reinforced my decision: we must break down prejudices and show everyone the other face of cancer, that of its warriors!

As demonstrated above, the primary strength of cancer warriors is their boundless resilience. They do not fear adversity. They are used to challenges and can adapt to changing and difficult circumstances.

Another strength can be found in their focus and speed of action. Because their battle jettisons the trivial and the superfluous, people living with cancer are quick to concentrate on the issues. Efficiency is their best ally because time is of the essence.

Yet another weapon for people living with cancer is their unwavering optimism. After being bombarded with unexpected and unwanted diagnoses, harsh treatments, unpleasant side effects, and more, one quickly learns to open one’s mind to any eventuality and to look for the bright side!

Personally, this focus turned my work into a mission. Meaning I no longer work to make ACCULTURA a successful business but succeed in its mission to help the world navigate differences. The battle against bias—whether it be ableism (or, in this case, cancerism), racism, sexism, genderism, ageism or any other ill-fated ism—is more than an objective. It’s a plea for all to see the immense value and perspective that “under-represented” equity-seeking groups can bring.

The question is: Can organizations—and those who run them—move beyond bias? Can they see the actual value of a cancer warrior through the thick smokescreen of stigma and misconceptions? The short answer: They might not have a choice but to take the “risk” and bite the bias bullet.

During their lifetimes, 1 in every 2 Canadians will develop cancer. This represents a significant chunk of the workforce, whether in terms of employees or entrepreneurs who run businesses that create jobs. Because cancer does not discriminate by race, age, or gender.

The battle rages on

As a woman in my 50s, I broke loads of glass ceilings in the business world. I proudly counted among the 8 female graduates in my MBA cohort and held— simultaneously—2 management positions in a male-dominated IT company while earning a meagre salary, and I was frequently turned down for funding to grow my businesses.

Garnering 30+ years of business experience, I found myself facing the thickest glass ceiling of all: the fear of being discriminated against because of an illness. While battles against cancer and many other chronic diseases are won every day, the fight for diversity is ongoing.

As an employer, client, or stakeholder, let’s remember that diversity of perspectives is a valuable asset. Let’s remember that everyone has a responsibility to help build a better world. This article honours all those who are fighting cancer and other physical and mental illnesses. It is dedicated to those who overcome obstacles every day and use their incredible resilience and willpower for the common good, as well as to all those who support them, from near and far.

A very special shout-out to Marie-Pier St-Hilaire , CEO of ACCULTURA’s invaluable partner AFI_EDGENDA , for her unwavering support and for her inspiring example of living authentically, which helped me come out of the “cancer closet.”

Communicating effectively in a multicultural context

Diversity training is a marathon

These words we shouldn’t pronounce